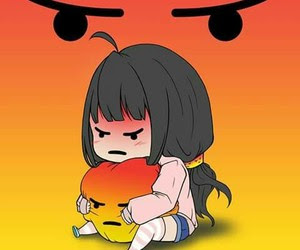 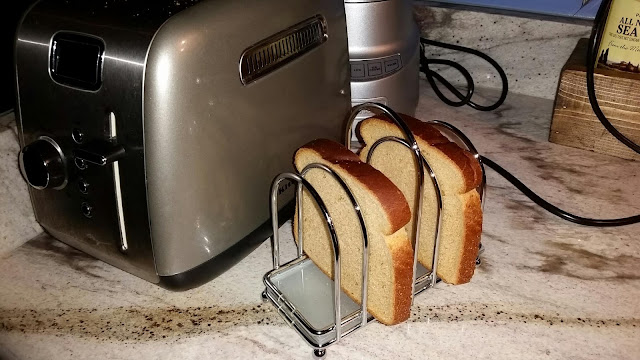 this is my new toast rack in its natural habitat
. innit juss tote adorbs? yes, it is! 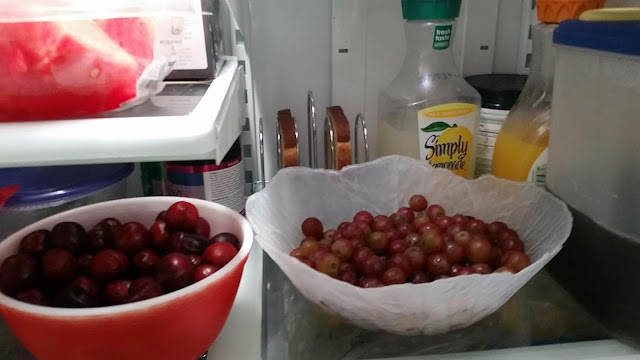 this is my new toast rack in its unnatural habitat because, in my quest for crispy crunchy toast, i have resorted to attempts at pre-drying the bread. this particular attempt involves overnight refrigeration.  good luck, ace! 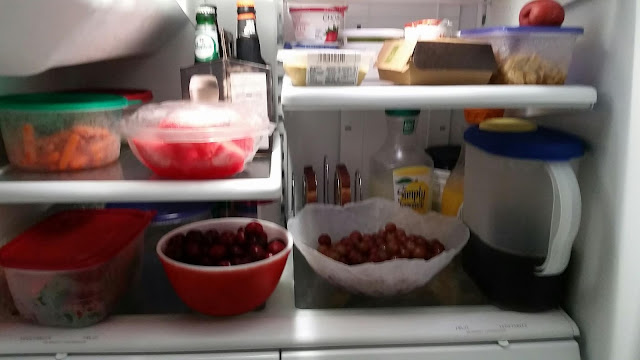 this is a wider shot of my fridger in case you wanted to do a little voyeuring.
Posted by ace at 21:04 3 comments:

banished from memory. moreover, banished with dishonor. damnatio memoriae... this phrase i heard in the book i am currently listening to describes what is pretty much the exact opposite of the purpose of memorial day, which is today. today we remember, with honor... we purposefully, intentionally call to memory patriots who have served in defense of our country and venerate their memory. damnatio memoriae is dishonorable banishment of a traitor along with all traces of his memory.

but, take away the dishonour for a minute. i think you can call for a memory to be banished without calling down dishonor upon it. i mean, maybe it's a painful memory, but not a bad one. maybe by nature of being a memory - in the past, not a current thing - maybe that makes it painful (but not bad).

so, it's painful (but not bad) and so you just want to banish the memory. you just don't want it anymore. you can't use it, don't need it, have no purpose for it, and it's hanging around like an albatross. but oh-so-typical of the human brain, you can't remember your dentist appointment, but you can't forget the birthday of your dead mother.

we had junior and mrs junior and baby junior over for supper tonight. i did baked potatoes with shredded chicken & toppings, chopped salad, fresh fruit, wheat rolls, tea, lemonade, and ice cream with chocolate sauce & sprinkles.

the potatoes take a wee bit of prep (wash, spray on olive oil, wrap in foil), and then they peacefully sit in the oven for an hour & a half. the chicken i did in the instapot, which is basically put the chicken in, shower it with mrs dash southwest seasoning, add a cup of water, set the timer, and walk away. the chopped salad came complete in a bag. the fruit took a little chopping - peaches, which were so ripe they'd hardly sit still to be cut, plus hulled & halved strawberries, all topped off with blueberries. the rolls were from the bakery and the lemonade was pre-made in a half-gallon jug. i did brew the tea fresh. for tater toppings, i took sour cream, cheese, salsa, and butter out of packages and into a serving bowls. the entire desert was store bought.

i'd say the hardest things were:

(1) deciding what kind of chips to buy. we ended up not even eating any chips, so those brain cells got all sweaty for noting. i ended up choosing fritos (because, of course), veggie straws (because baby junior likes those), and bbq chips as a backup plan. i figured the salsa could double as a tater topping and dip, and i added two types of hummus. as a backup-backup, i got some mixed nuts. way overkill on the hors-d'oeuvre, as we ate none. in retrospect, i might build in some appetizer time for my next gathering.

(2) the timing involved in getting everything pulled together. i put the potatoes in and then had like an hour to twiddle my thumbs. there just wasn't a lot of prep for any of the rest of it. but with a half hour to go, it was a bit of a mad dash. i mean, i could have done the salad beforehand, i guess, but i was sort of leaving it for mrs junior to have something to do when they got here. then, they were like 15 mins late, so i ended up fixing it and everything was ready when they arrived. in retrospect, i might find a couple more things to do earlier in the process.

(3) cleanup. for starters, the dishwasher was halfway full. i actually ended up pulling a couple things out of it and washing them to use. we only have four big plates, and one was in the washer, and then i needed both pairs of tongs, and one was in the washer. then, at the end, there wasn't room for everything. i could have left dishes in the sink and done another load in the morning, but i wanted to be done, so i finished them up by hand. it wasn't that much... a instapot pot, the steamer insert and top to that pan, the ice cream bowls, a couple glasses. i just didn't want to face them the next time i walked in the kitchen. in retrospect, i might make sure the dishwasher is empty at the start of group dinner.


i know there will always be difficult parts or awkward parts, but i'd rather do this more often so i could shake out the basic process. i mean, running & emptying the dishwasher before the meal is a basic.


a few aspects seem to be keepers:

(1) having taters and toppings worked well. people like to fix their own food, and it does take some work off the host. although i don't think i can get away with having taters every time, i will look for things that work that way. top your own pizza. build your own sandwich or salad or taco. et cetera.

(2) too much food is better than not enough. that's always true, and if it's food that makes good leftovers, even better. i had too much food but didn't throw anything away.

(3) don't sweat the drinks too much - unless you're doing a drinks party or a long event. i did lemonade and tea, plus a fun drink bottle thing for baby junior. that was way plenty. i mean, don't get me wrong, everyone found something they liked and that was nice, but people will always drink water. i didn't sweat the drinks and am glad.


what is your favorite thing to do for supper gatherings? do you like to try new recipes or stick with well-known territory? have people arrive early for social time, or just right on time for the meal? do you try to keep a balanced plate or just go with whatever seems yummy? what works well for you and what would you change?

i am emphatically over soggy toast. 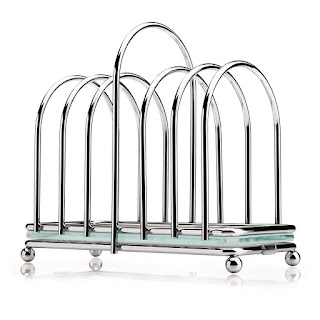 it's imported from britain. all "what what" and whatnot. i must needs procure a measure of clotted cream.

the bright shiny rack. the frosted glass base. the hundreds of excellent reviews on amazon. what's not to love? i mean, without having actually experienced a morsel of toast plucked from it's gentle grasp, what's not to love? pluswise, it's less that 25 bucks.

i ordered one. i'll let you know how it works out.

the motorcycle lumberjack and the worm in a tube

so, anyway, today i had a root canal. i'd never had one, so i didn't know what to expect. i had the impression that a root canal was a terrifying and laborious procedure that required several days' recovery. everyone i talked to assured me they had come a long way and it just wasn't like that anymore.

got up at the normal time despite needing to leave the house about 45 minutes later. this allowed me the luxury of an extra cup of coffee followed by scrambling madly because i was running late. when i change timing in the morning, it's a challenge to get out the door on time. am i ever ready early? hahahaha. ha. haha.

i used google maps to help me find the place because i didn't recognize the street name. it wasn't far from home and i learned about a new street, so that was cool. i got there right on time.

check-in was simple. they had all my info from a past visit. even thought it was like four years ago, nothing on my records had changed. easy medical office check-in is the benefit of leading a boring life.

within 10 or so mins, they were calling me back. they had to retake some x-rays even though the dentist just took some on tuesday. fine. whatevs.

the doc came in and i was like, um, scusi? here's this barrel chested guy with a pony tail, looks like he just got off a harley or came in from a round of lumberjacking.

so he asks me what's up and i go through my Tooth Tale, and as i am really getting into the whole thing, i see impatience flash across his face. um, scusi? talking about my teeth here, big guy. but i try to wrap it up because bottom line, we all know what the problem is.

a root canal treatment is required when the tooth has died. it's very sad and i didn't even have a funeral for it, but my tooth had died. tooth death comes down to nerve decay... the nerve withers and the decaying nerve tissue becomes a pile of rotting pulp in the root canal.

the root canal is a tunnel in the tooth where the nerve lives like a worm in a tube. so, when the nerve dies, there's nowhere for it to go and it just sits there in the canal, rotting. in my case, the rot had started to leak out the side of my gum in the form of a fistula. if you think that's disgusting, you probably can't stomach how long this went on while i denied it was a problem.

dead worm in a tube. how do you get it out? turns out endodontists use cleaning tools that look a lot like miniaturized bottle brushes. they drill a hole in the top of the tooth or (in my case) crown, reach in and scrub down the root canals (two roots per tooth, two canals) with these tiny little pipe cleaners. up down up down up down in a motion that is making my head nod like a puppet, the motorcycle lumberjack is reaming out my tooth.

during processes such as this, i practice calming techniques. constantly policing my face, neck, shoulder muscles and demading they relax. smoothing out my breathing. calmmmmm.... calmmmmm.

i got so calm i fell asleep.

fell asleep with my jaw propped open and a burly pony-tailed man's hands in my mouth.

through a series of grunts, i communicated that i was fine. he carried on and completed the procedure. my mouth and jaw remained numb for several hours, and ibuprofen is my friend.

of carts and their respective wheels

i was watching this girl on television the other day.

well, i was watching a commercial.

i was watching television where this girl was in this commercial.

thing is, she did a cartwheel.

she did a cartwheel and it struck me.

it struck me that what she did looked different that anything i ever tried related to cartwheels.

everything i ever tried related to cartwheels was focused on propelling myself onto my hands.

everything she did related to cartwheels was focused on propelling herself onto her feet.

she just reached out her arms and flung herself onto her feet by route of going upside down first.

she didn't fall forward or fall backward or land wrong.

the essential mechanics of it were the same as anything i ever tried.

the difference was,
where i have always been stymied by how to begin,
she just concerned herself with where to end up.