so glad THAT's over.

i will readily admit to a bit of ambivalence over the xmas season. on the one hand, jesus is the reason and whatnot, but on the other hand, jesus is really not the reason at all. solstice and the commandeering thereof by the early christian church - those are the reasons. knowingly celebrating jesus's birth inaccurately could most tactfully be called disingenuous. solstice was here first and claiming preeminence for christmas casts it all in an inauthentic light. if one of your stated goals is getting other people to believe what you're saying, shouldn't you say things that are believable?

around these parts, the act of claiming the christian faith is brings with it a cart of baggage. there's a definition, a persona, a bagful of things assumed about christians, not the least of which is that christians exhibit the sort of intolerance ironically displayed by those assuming things about christians.

i am reluctant to say "merry christmas" because i am concerned declaring for #teamjesus will brand me as anti-gay, anti-biracial-marriage, anti-non-christian, anti-fun, anti-cake, anti-beer-on-sunday -- anti- whatever.

and i don't want to be anti- anything. i want to be pro-. i AM pro-. pro-love. pro-acceptance. pro-live-and-let-live. i mean, hell, i am enough of a mess to worry with. i've got no time to be fixing anyone else.

so, there you have it.

and thank the good lord, it's over!

yesterday i received two hours of sexual harassment training. i will provide herein some literal (but perhaps not verbatim) quotes from the actual instructor, and you can decide for yourself how effective the class may or may not have been.

"anyone want to hazard a guess at what a 'house party' is? anyone? anyone? c'mon. you know this. anyone? it's sex toys! haha!"

"this one makes me sick to my stomach."

"you know what breaks my heart? molestation of teachers on children."

"he asked her to come to work without underwear. haha!"

"i'm not going to get into a lot of graphic details. haha!"

"they got slapped around - as well they should have! haha!"

"do i have a right to call larry names? i might, but he won't like it. haha!"

insert here: discussion of three-second rule. reference to seinfeld episode [ed note: looked it up, it's called "the shoes"]. use of word "cleavage". haha. positing that the three-second rule provides acceptable guidance for how long a man can look at a woman's body. description of teaching three-second rule to son's Sunday school class.

"criminal touching, for men, that's touching them in places that would be covered by a swim suit. for ladies, i like to say it's a 1934 swim suit. haha!"

in reference to photo of lady making angry face at phone: "she got a sext from mark [sic] weiner! haha!"

"patting each other on the butt is only acceptable in football, and shouldn't be even there."

"they may medicate. what does 'medicate' mean?"

after using attendee's name in an example: "i'm going all the way with this, bob. thanks for letting me, even though i asked for permission on the backside."

"i'm going to clean it up - 'loss of bedroom activities'. haha!"

"i have to cover bullying now because EEOC has put it in the regulations. i hate that it has come to this. this should all be common sense. this is not my favorite section to teach."

"i always thought epithet [pronounced, ep-eh-taff] was something on someone's gravestone. haha!"

"if you don't get my humor, you can throw something at me. haha!"

yes, all this was really said.

yes, the blog title is a shameless plug for views.

marathoner. strange but true. i am a marathoner. i've run 14 now, and although it's not as many as the guy i met a couple weeks ago -- he was on his 1011th! -- it's nothing to sneeze at. the vast majority of people in the world do 0.

according to findmymarathon.com (and who could doubt them? ) -

How many people finish a marathon each year?

the median entry fee is $75. i am doing my part to bend that curve, as i'd consider $75 a bargain. i am more concerned about time and place than money, and that explains everything you need to know about my personal finances.

look at this little tidbit:

In 2013 50,304 people finished the New York City Marathon. Canada's largest marathon was the Ottawa Marathon with 4,803.

the NY marathon is the USA's largest, so this tells us more about the USA-canada dichotomy than it does about marathoning, but still - fascinating, amirite?

2013 marathons in order of number of finishers...

here's a question: why do they repeat "Marathon" on every row? i mean, it's a website about marathons and the setup to the chart indicates that it is about marathons. are people going to think, suddenly, that the population of boston is 17,580? that 17,580 people in boston purchased eggs last week? i mean, durr.

hawaii is the southernmost and westernmost state, so having marathons there at all is going to sort of favor their placement.

The coldest marathon in the United States is Willow Winter Solstice Marathon in Willow, AK with an average race day temperature of only 15F/-9C.

yikes. 15F?? i used findmymarathon.com's search tool to locate marathons in the USA with average temperatures between 45F and 55F. there are 254! so, i split the difference and chose 50F. there are 20 marathons whose average temp is 50F.


blooms to brews will be new in 2015, but of the existing ones, lake lowell had the least average number of finishers at 46. this website only lists certified marathons, and that's a pretty low count for a certified race. isn't it? maybe certification is meaningless.

The typical weather for race day, coupled with a mostly flat course with few turns, can be conducive for a PR or Boston Qualifier (BQ).

this, in my experience, is false.

heard chris rock today on NPR, talking about his new movie, standup comedy, and how he defines success.

talking about stand-up, he said when standup comedians get really good, they are pressured, encouraged, cajoled to give up standup and start making movies or maybe a television show. it's like standup is only the means, a mere stepping stone.

I mean, I guess all comedians, that happens. I mean, standup's the only career like that, where once you get really big at it, people kind of encourage you not to do it. Some of our greatest standups don't do standup anymore. Steve Martin's one of the greatest standups to ever live — the guy doesn't do standup. Eddie Murphy, amazing — Michael Keaton, who's great in Birdman, was, like, a really great standup comedian. So many guys don't do it anymore. 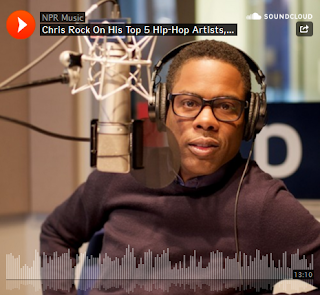 one thing that seems true to me about standup is that it must be difficult. not the actual standing up and talking. that doesn't seem so hard. what seems hard is:
...the stress caused by the risk of bombing.
...the ego-smushing blow of actually bombing.
...developing the material.

standup requires fresh, relevant, funny, unique, original material. you'd have to be on your toes, developing and testing material constantly. nothing is tireder than yesterday's comedy. no one wants to hear the same joke twice. well, unless it's ron white doing "tater salad". that shit is just fun-nay every time.

there's no sampling in standup. original material only. generating all that original material must be difficult, and then... the audience will use it right up and ask for more. like working for hours to create a meal, only to have it eaten and gone in a few minutes. steve and michael and eddie and the others probably just got tired of all that work.

chris went on to say he tries to keep up with the standup, not let that part of himself go.

I try to stay with it, and I try to stay in contact with comedians, just keep comedians in my life, because comedians are their own species. If you get away from them, especially as a comedian, I think it's dangerous.

that's laudable, to stay in touch with the mindset of working to create original stuff. when he says it's "dangerous" to get away from comedians, i think he's talking about the good influence of comedians' work ethic.

he's also talking about the irreverence, the political incorrectness.

Hey, everything's funny — in the right context and done by the right person — everything.

the crucial point to "everything's funny" is the same point is most of life: context. contexto es todo. context is everything. a comedian has to be aware of his surroundings, his audience. if you assault people with words, and they laugh, that's comedy. if they don't laugh, it's no longer comedy: it's assault. funny is in the eye of the beholder.

it's like - and we've talked about this before here in this space - grass is not green per se, because color is not an innate feature. grass is green in the presence of the most common forms of light in our world, with sunlight being right up there, because greenness is a function of the biological composition of grass and the presence of the correct sort of light.

grass is not green at night. words are not comedy if no one is laughing.

but chris wants to stay around the irreverence even when no one is laughing, and i think that's a good thing, as important a thing as the work ethic. being able to appreciate the humour all around us keeps us sane. i don't want to take life or myself too seriously.

that's one component of how i'd define success.

But most days I get to, like, spend really good time with my kids. That's what success is, to me.

i guess that's a pretty good definition of success, too.